I stop telling fairytales, I stop writing in Turkish for today.

Because today, we need you, we need every single person's belief and support all around the world to stop bullying and limitating regime in Turkey.


You may not know, also some Turkey citizen also may not know - because media kept on telling fairytales last night - but last night Turkish people, stand againts tear bombs and compressed water attacks from the police to defend their rights to keep the single green area that left in the center of Istanbul, which the prime minister stated "If we want to destroy it, we destroy it." about, Taksim Gezi Parkı. Today I'll write about, what happened last night, what is shown on the television, and how Turkish people become one heart to support their right for freedom. If you want to support us, you can join the protests in your country and use hashtag #direngaziparkı or #occupygezi to read further and support the protest.


I am ashamed to stay at home at these days and proud of all of my friends that have been in Taksim, yesterday and will be there today, tomorrow and until it stops.

If we're gonna win this thing, it will be with the help of social media - since our media does not support its own citizens - so I'm writing this down to make even one more person to know whats really happening. 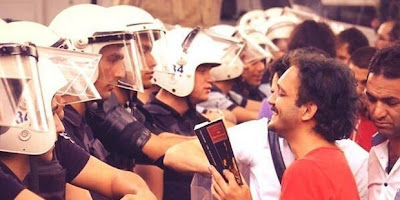 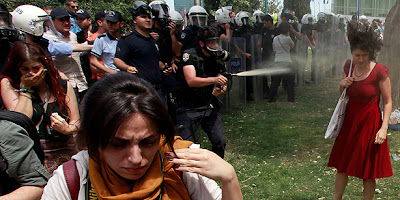 First, how it is started..

Taksim is the center of social life in Istanbul, by social life I dont mean malls of course, but hundreds of cafes, restaurants and pubs where people can actually be "social". Also Taksim Square is the center and symbol of protests and  gathering for all kinds of rights. This annoyed the government so much that they came with a "big" project for Taksim to literally change every square of it, in order to make it more "convenient" for pedestrians. So they started to dig Taksim and closed half of it to transportation, to actually stop people coming to Taksim. However, they couldn't manage to stop people, of course.

AN interesting part of the project was to rebuild a Military barrack which is destroyed in 1940 and turned into a park, Taksim Gezi Park. In order to rebuild the barrack and make it a mall, like we need another - there are more than 90 malls in İstanbul - they need to cut down the trees and destroy the park, the only green place left in Taksim, Beyoğlu. So people react this decision which is not even asked to the citizens, and gather at the Gezi Park 4 days ago, build tents, started reading books together, planted trees to the place as a protest. The protest was in peace because the protesters was regular citizens who want their right to save the green, not militans or betrayers, but friends whom gather around with discarding all their different sides from eachother, whether they are Turkish, Kurdish, Armenian, conservative, modernist or communist or anything else..

As I stated before, the prime minister said, at the ceremony of starting the third brigde of Istanbul project, which will also end of cutting hundreds of trees, "They can do whatever they want, if we said we're gonna do that, we will do that."

Yes, the protest was at peace, until yesterday, at 5 am, when the protesters were mostly sleeping in their tents, Turkish police have attacked the unarmed citizens in Gezi Park, with thousands of tear gasses, compressed water and sticks. Thats actually when Turkey woke up from a ten year of sleeping.

Whoever that have the courage and opportunity to go to Taksim literally walked to Taksim to support the protesters. In a couple of hours, that considerable little group of people become hundreds and thousands. They should foresight this number before that the police did not run out of tear bombs, some said they actually imported that bombs before this attack. THE POLICE, which sould defend its citizens, ATTACKED its own people who does not have any weapons and shoot the tear gas and bombs right into their faces like they were terrorists. 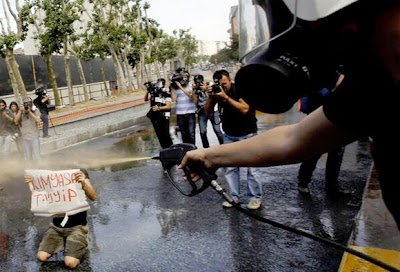 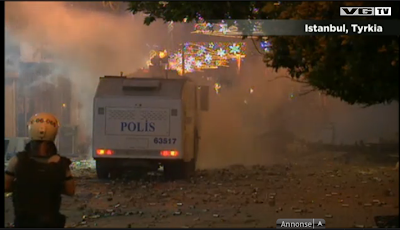 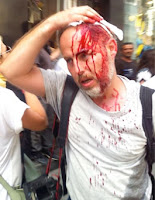 They thought this attack would stop the protesters, because they hurt, they were lonely and no media was giving any news about Taksim. However, they did not consider one thing, that Turkish people had conquered İstanbul by themselves, same Turkish people had made a war to gain their freedom just 90 years ago. Groups walked to Taksim, friends, families walked to Taksim, to gain their rights to have a voice over their country which they actually conquered twice and to show the government that their job is not to rule the country as if its theirs but to be the voice of the citizens and obey them.

Football team fans who can literally kill eachother if they had a chance even gather all together to defend the honour and freedom of the citizens, arm in arm, all in peace. Girls with turban supported girls without turban, whom actually are friends and sisters of them, arm in arm. Nobody asked "where are you from" to any body. Media and government tried to show these things as the biggest problem of Turkey however, it was not, as we saw last night. 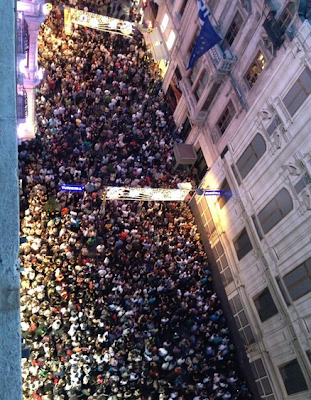 But we did not saw it on television, thats how even I can estimate half of Turkey even could not learn what happened and is happening in Taksim. This is what we saw in Turkish television last night: 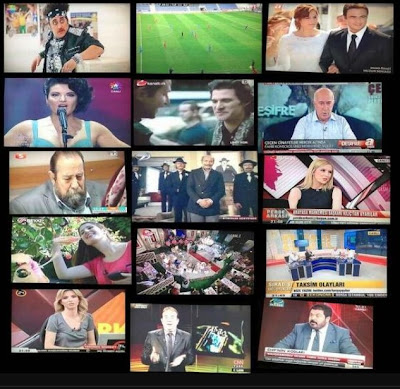 This is what was happening at right that time: 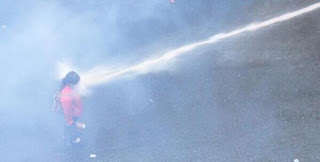 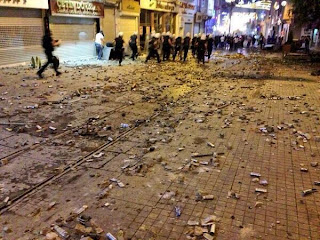 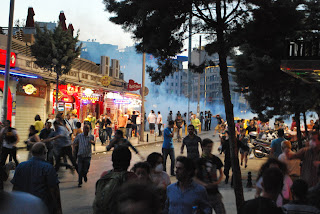 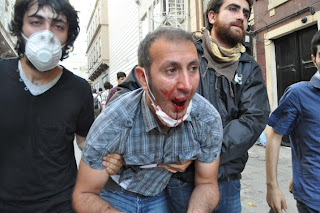 Media kept its silence but Turkish people keep on SCREAMING FOR HELP AND SUPPORT on twitter. They blocked the 3G internet, other people open their Wifi's to everyone to help the protesters make live broadcast from the clash scene.
They sent thousands of tear bombs on people, but doctors published their phones to internet to help people, lawyers get into action to help the arrested protesters, tradesmen open their cafes to people to drink water, to hide from the police and big hotels in Taksim also opened their doors for injured people.

And do you know what the governor of İstanbul said about the situation? "There are 12 injured people."  Does anyone can really believe that?

There are police support coming from close provinces to help the police, while there are HUNDREDS OF CITIZENS, GET INTO BUSSES RIGHT THAT MOMENT AND ARE ON THEIR WAY TO ISTANBUL.

Today, early in the morning, Asian side of İstanbul WALKED to Europian side 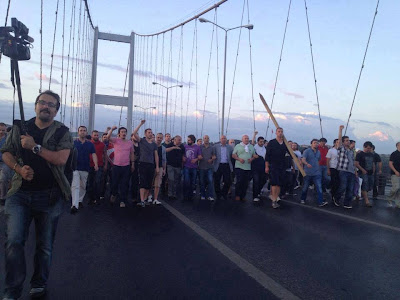 Do you ever see this number of people walking for freedom?
This is hope for future.

So join us, join to spread the news to the World, join to say that, we are all free, we will not obey the ridiculous rules of Governments. 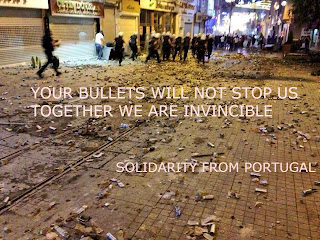 The police CAN NOT ATTACK UNARMED PEOPLE, they should DEFEND THEM.
I am proudly saying that in some provinces police explained that they will not attack nor stop people from protesting. But shamefully in most of our provinces its the opposite.


This is what I can tell so far, I know I missed many parts of the tragedy of last night and the glourious resistance of Turkish people, this is shamefully what I can do so far.
For more, please visit : http://occupygezipics.tumblr.com/
or follow: https://twitter.com/GeziDiren
or support with: #direngaziparki , #occupygezi 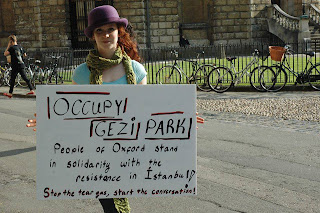 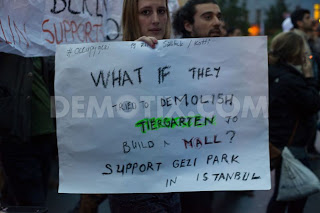 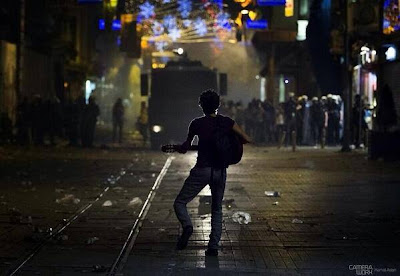